Yesterday I went over in detail the QB battle for the Dirty D championship match between Sean and myself. Today I am going to continue to do some analysis, including stat predictions for all positions. 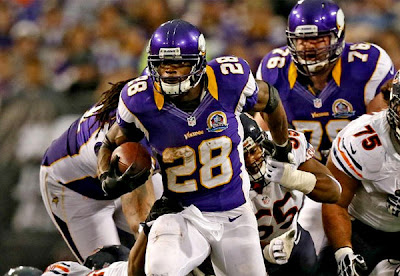 I'm SO glad I have AP right now. That's an incredibly obvious statement, but what I really mean is I'm glad he is on my team so I can use this blog as way to discuss AP's historic run. Before I go into the matchup for this week, let's take a look at some of the most amazing stats I've found during this epic 2K run by AP.

-AP has 1,812 rushing yards and 11 TDs. He has carried the ball 289 times which means his average rush is 6.27 yards. Keep in mind he has done this after tearing his ACL and MCL last December (less than a year ago)

-AP has the same amount of rushing yards since Week 7 (1,313) as Arian Foster has had all season.

-The past 8 weeks AP has averaged 164 rushing yards, he has 1,313 yards in that time and that's the BEST 8 GAME STRETCH IN NFL HISTORY. Those 1,313 rushing yards are more than 6 teams have all season.

-AP has 909 yards after contact this year. Distant 2nd in the league is my boy Doug Martin with 572

-AP is currently tied with Barry Sanders for the NFL record of 7 rushes that have gone for over 50 yards. He has two 82 yards TDs and 20 runs of 20 yards or more. Next closest guy in the league is CJ Spiller with just 11.

-The Vikings are dead last in passing yards per game at 168. The fact that AP is breaking records with absolutely NO passing attack is just unbelievable.

-01/01/07 Never forget. AP in his last college career game only managed 77 yards on 22 carries in a loss to Boise State in OT of the Fiesta Bowl. Had to throw this in here, sorry.


Alright. Enough drooling. Lets get into his Week 16 matchup @ Houston

Houston, unfortunately for me, has a pretty good run defense. They have shut down almost every opposing RB this year. However, as of late, they have not been as dominant as they were towards the beginning of the season. Vick Ballard ran for 105 yards last week on 18 carries. The week before was the crazy Pats blow out game so I'm not even going to look at that one (Rildey ran well). Before that CJ?K had a very slow game that resulted in only 50 rushing yards, even though the first time these teams met CJ put up 141 against this defense. I think AP is going to be OK because this Texans defense will mostly likely have a very hard time bringing him to the ground. I don't know if he is going to break 200 yards again, but It's clear that this man is on a mission and he is definitely match up proof. 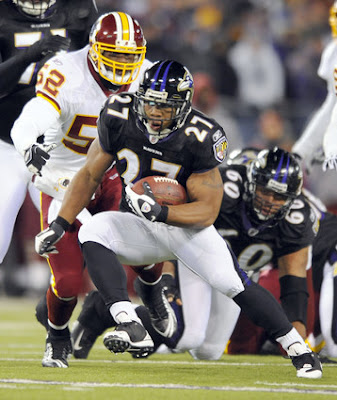 A lot of people have viewed Ray Rice as a disappointment this year... those people are clowns. Ray Rice currently sits 4th in the RB standings for our league, 11 points ahead of T rich but 30 points behind Dougie Fresh, who I dubbed Ray Rice 2.0 back in April.

Anyway these are Ray Rice's totals from the past 5 weeks:

A couple things stand out here. Last week was a complete dud and the first game with the Ravens new Offensive coordinator. The Ravens got blown out at home and Ray Rice probably never had a chance to get going. Part of the reason the Ravens hired a new Offensive Coordinator is because Cam Cameron wasn't incorporating Ray Rice into the scheme as much as people would like. This scares the hell out of me. I really think the Ravens are going to make a point of getting Ray Rice the ball this week vs the Giants. It's a big game for both teams, especially considering the Giants ALSO got blown out (actually shut out) on the road in Atlanta last week. 5 running backs have gone over 100 rushing yards against the Giants this year, but they do an pretty solid job of prevent rushing TDs. It's safe to say I am more worried about Rice in the passing game than on the ground. I think he has a nice bounce back game this week.