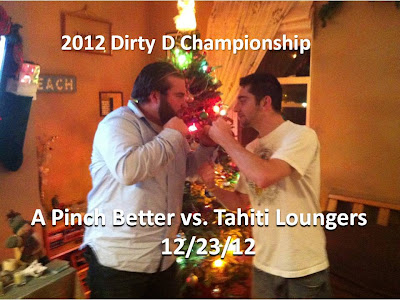 Well, I held off Sean's furious comeback on Sunday night and secured my 2nd Dirty Championship with a 149-142 win. As expected  it was an extremely close matchup. ( I predicted a 6 point victory, I won by 7) I jumped out to an enormous lead but Sean caught up and almost passed me at the very end.


There's no doubt pretty much everyone was rooting for me to lose. And to that I say:

Anyway here are some notes from the championship matchup:

1. Hakeem Nicks put up a doughnut. 0 points. To be honest, I really thought Sean SHOULD have played Miles Austin over Nicks (as did the consensus of the experts on the internet), but was afraid to reveal these thoughts on my blog in case it convinced Sean to make the change. Austin ended up with 14 points. Not a good feeling.

2. Arian Foster, the #1 overall pick,  had 2 measly points. He fumbled early and coudn't get going against the Vikings. He left the game in the 3rd Quarter with an irregular heartbeat. Thank God this awful/scary performance didn't cost me a championship... that would have truly been an awful way to lose.

3. AP had only 9 points. AP had been beasting so hard that it would be impossible to be disappointed with anything less than 20, but AP only managed 9 points. He still amassed 80+ rushing yards and has an outside shot at the record this week.

4. Aaron Hernandez only made 1 catch on a season low 5 targets. WTF???? This guy was the consensus #1 TE for Week 16 and laid an egg like the rest of the team did in Jacksonville. What a Houdini act. I know Jax does a good job vs TEs, but c'mon. Brady DID miss Hernandez early in the end zone but still, this stat line was wildly confusing. 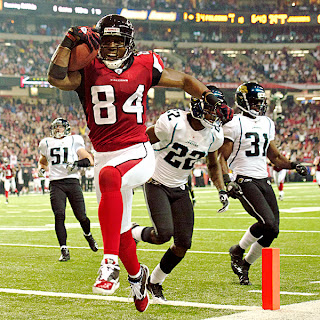 5. Roddy White & Aaron Rodgers- These are the only 2 players left on my roster from the 2010 championship team I had. How did they do this time around? Roddy White had a MONSTER 41 point game and Rodgers chipped in with a robust 34 points. These guys are bonafide studs and Tahiti Lounger Legends. Roddy White has amazingly been on my roster 55 out of the 64 weeks our league history. He also has never missed a game in his entire career. He is and always will be my Captain.

6. Defenses don't win championships- Sean's defense put up a ridiculous 28 points, his team's highest scorer, but the 17 points from my GB defense was enough to hold off Sean. Chicago had a dominant defense all year, but I proved once again it is a perfectly fine strategy to stream a new defense each week. My total points from my defense all season amassed me 179 points over 15 games which averages out to about 12 points per week. Here are the top scoring defenses from this past season:

As you can see, Chicago is head and shoulders above everyone, but they are also about to break all sorts of NFL records for scoring TDs. Point is, streaming defenses each week works.

8. I carried a 149-102 lead going into the night game. Marshawn had a huge 1st half and by halftime he was right on pace to beat me; the score was 149-126. Thankfully the game was a blowout and the clock ran quickly in the 2nd half.

9. The 142 points Sean had was the 5th highest losing score of the season. Sean also lost to me this year when he scored 144 in our regular season matchup. 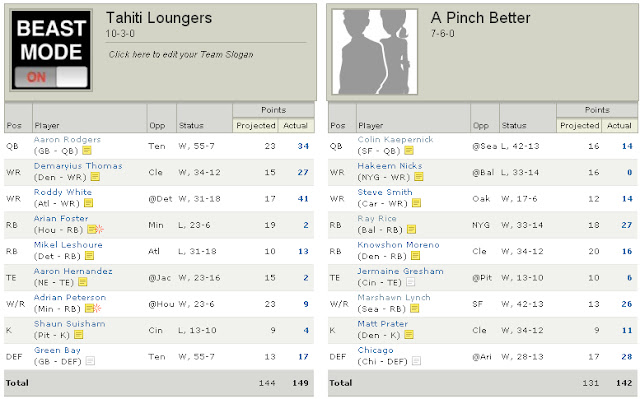