So far I have analyzed the QB and RB1 matchups of my championship match with Sean Cosgrove. Below is my RB2 breakdown. Marshawn Lynch and Arian Foster are obviosuly very, VERY strong RB2s. This is a big part of why these teams got here. Lets see who may have the advantage this weekend

Arian Foster is the best weekly bet for a TD in the NFL today. He has scored in all but 2 games this year. He is a powerful, down-field runner in a run-heavy offense. I selected him 1st overall and he has delivered very nicely all year for me. This week Foster is facing off against the Vikings (AP vs Foster...wow) who have given up the a slew of points to dangerous RBs this year. Let's look at some of the other power RBs who have feasted on the Vikings recently-

As you can see RBs have scored a ton of points recently against the Vikings. Week 13 they played against the Packers who pretty much do not have a running game. Week 11 they had a bye and Week 10 they played the combo of Bell/Leshoure who combined had over 20 fantasy points. Foster should have no problem gaining yardage and I feel like this may be one of those weeks where he bows multiple times. It looks like a 20 point effort is almost a guarantee as long as he stays healthy. 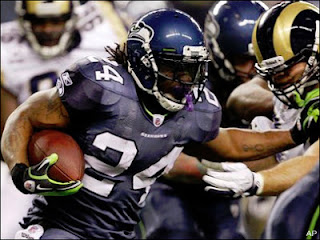 Man, this is one scary guy to play against. Lynch has been in beast mode for quite some time now, he currently sits 6th amongst running backs in our league scoring for the year. He has gone over 100 rush yards 8 times this year including the past 2 weeks, where he has a total of 21 rushes for 241 yards which comes out to a eye-popping 11.5 YPC. This week's defense, San Francisoco, is a lot more stout than the run defenses of the Bills and Cardinals, however Marshwan Lynch owns the 49ers, somehow. They give up the least amount of points to RBs in the league, but Marshawn was able to crack 100 when these teams met in Week 7. The 49ers have only allowed 4 rushing TDs all year (and 2 were to Danny Woodhead last week, which barely counts) so the chances that Marshawn doesn't find pay dirt are working in my favor .This is a huge game in prime time on Sunday night and I personally think Marshawn is going to show up in a major way. Russell Wilson, like RGIII, is capable of the "read-option" offense and I think Lynch will probably continue to benefit from Wilson's coming out party.